Whilst we would not want to be within 100 light years of a supernova, because of the lethal radiation it emits along with the light, such events are essential for life. Without them the universe would be full of hydrogen and helium but no heavier elements, so no interesting chemistry would be possible. The huge nuclear reactors that are stars are doing what the alchemists wanted to do, transmuting elements. It is in their interiors that nuclei of carbon, oxygen, nitrogen, iron, etc are formed. It then takes a supernova explosion to scatter those elements out into interstellar space. From there they may eventually find themselves in clouds of gas and dust collapsing under gravity to form new stars with planets around them.

It is believed that the candidate nearest to us for a supernova in the near future is Betelgeuse, the red giant at the top left corner of Orion. It is estimated to be 640 light years away from us. It is likely to explode some time in the next million years. It will be brighter than the Moon, easily visible in daylight. Wikipedia has a detailed article about Betelgeuse.

The nebula M1 is the remnant of a supernova in our galaxy that occurred in 1054 AD. It was recorded by Chinese and Arab observers. It is 6,500 light years away but it is still the strongest continual X-ray and gamma-ray source in the sky. 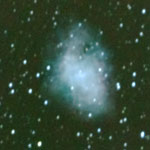 Supernovae in our galaxy were also seen in 1572 (Tycho's Supernova) and 1604 (Kepler's Supernova). They were visible in daylight. Their remnants are respectively at least 8,000 and 20,000 light years away and too faint for amateur photography.