The Milky Way in NE Cygnus 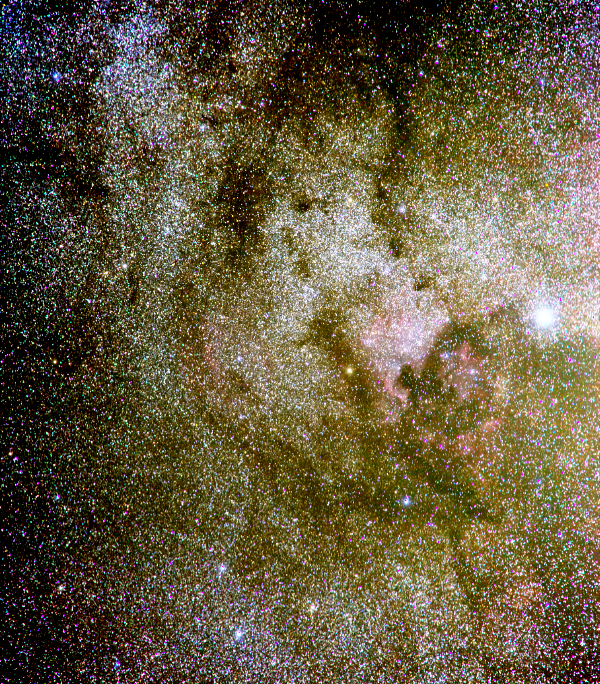 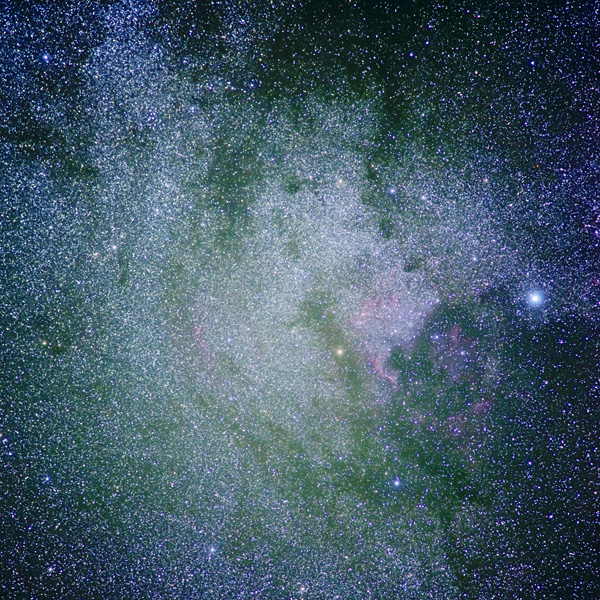 The bright blue star on the right is α Cygni, the top of the cross of Cygnus. The orange star near the middle is ξ Cygni. To the right of that is NGC 7000, the North America Nebula - so-called because of its shape, which can be discerned here. The red area going down into "Mexico" is glowing hydrogen gas. The darker reddish area to the right of NGC 7000 is the Pelican Nebula and I was interested to see how my unmodified DSLR would pick that up.

The cropped field shown is square, 13° across, scaled down from an original crop of 3654 x 3654. This was taken with a Canon zoom lens set to 105mm. I plan a closer shot with a 400mm lens when the weather permits.

I had previously photographed the "Mexico" part through a telescope, as can be seen here. NGC7000 is too large to fit in a telescopic field, which is why I am trying camera lenses.

GRIP detected about 24,000 stars in each of the constituent frames of this stacked result. The only processing after stacking was by tone curves and a little colour saturation, all done at the full stack depth of 32 bits per channel before reducing to 8-bit JPEG.

After a day of rain the skies became very clear, so I tried a closer view of NGC7000. 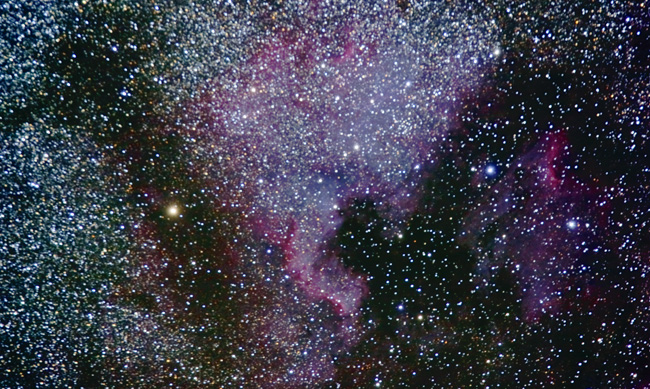 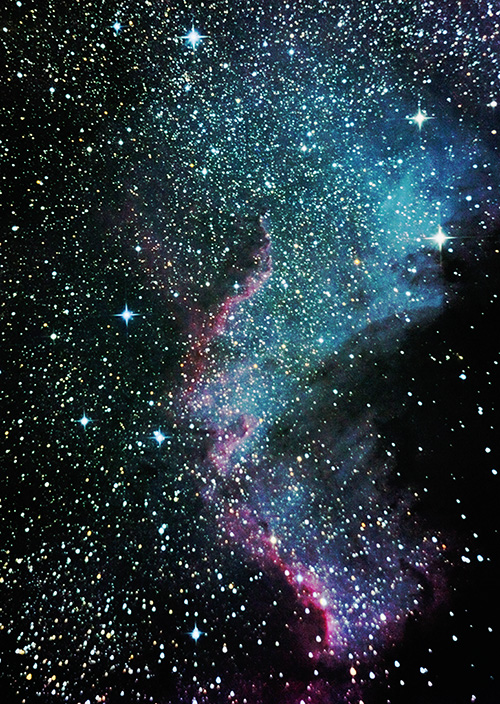 With an unmodified DSLR this nebula is not as red as most photos show it. That is because most published photos were taken with CCD cameras. They are monochrome devices so multi-channel images are created by combining exposures made through different coloured filters. For photographing nebulae the filters used tend to cover wavelength bands around particular spectral emission lines that emanate from such nebulae. Examples are the Hydrogen Alpha line at 656nm (red) or Oxygen III (fully ionised oxygen) at 501nm (green). This results in false colour photos, unrelated to human vision.

Digital SLR cameras have a glass plate in front of the (usually CMOS) detector that cuts out infrared wavelengths that would otherwise be likely to dominate photos. In Canon DSLRs, like mine, the cut-off comes just past the Hydrogen Alpha wavelength but already the sensitivity is falling at 656nm. So such cameras make emission nebulae look less red.

Our eyes cannot distinguish colour at very low light levels but if they could we would perceive the colours of emission nebulae as similar to the DSLR images rather than the CCD ones.

CCD cameras have one major advantage over DSLR: every pixel counts (well, except for defective ones). In a DSLR there is a pattern of coloured filters over the pixels, as I described here, so software has to interpolate missing data for alternate pixels. CCD cameras used to have other advantages but DSLR sensitivity has overtaken them unless you want to spend a lot of money for doing very serious research.